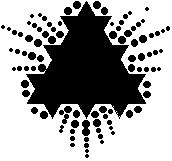 This crop-circle shows another type of Sierpinski form expanding outwards, rather than cutting away inwards. 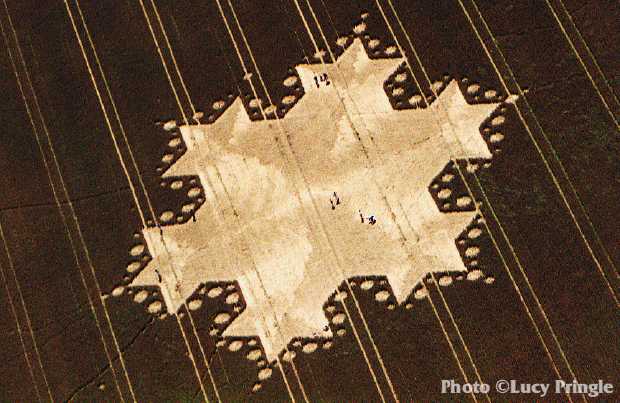 Now, an extension so-to-speak of the Hackpen Hill form into this Koch star-fractal. 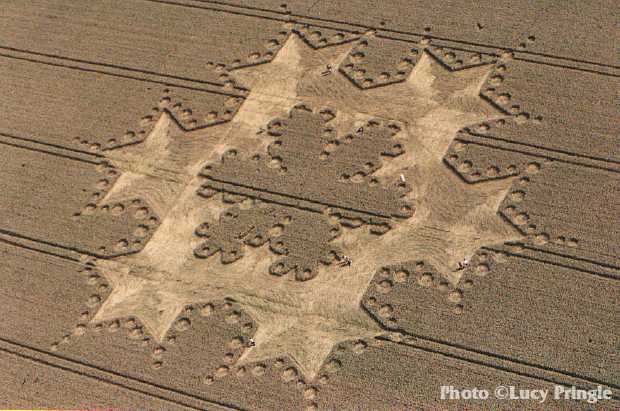 But then a month later...the same Koch fractal with this amazing "snowflake" shape within, because although at first sight the inner shape seems so different from its surrounding star fractal, the snowflake itself is made of the same elements as its outer star. Want to test yourself? Consider how that is so, before reading on!... Among other things: All the snowflake's laid indentations are made of half-stars or star-points turning inwards, instead of outwards in the external star. The snowflake's single finger-like projections in standing crop which point outwards are miniatures of the external star's standing crop projections pointing inwards. The circles inside the snowflake are outside the star.

Three iterations of the Koch fractal. The crop circle contains the second example, but the third one is hinted at by the surrounding circles in two sizes. 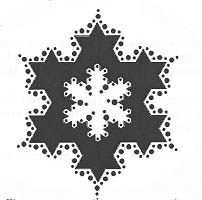 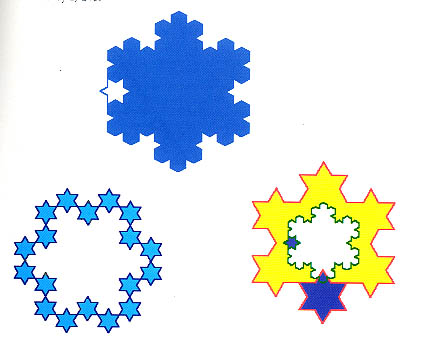 And here are even further ingenious interrelations between the inner and outer shapes. 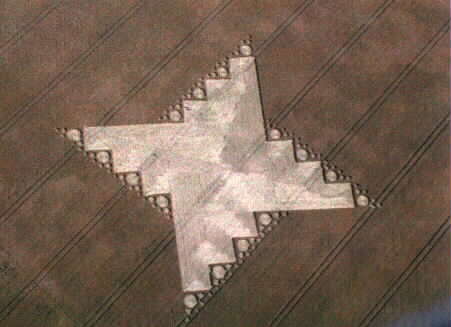 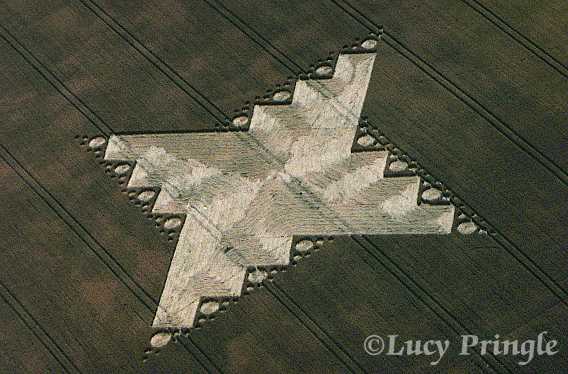 Due to its marvellous lay, from whichever airborne angle this formation is photographed, the shadowing will give it a pleasant, even fascinating 3-D effect. 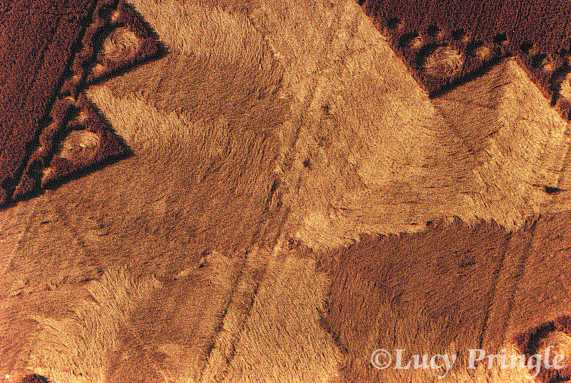 This photo by Lucy Pringle is one of the most amazing crop-circle photographs which I know of.

Again, the organic structure is accentuated by all "diagonals" being irregular "steps" instead of straight lines. See how effectively the grain is laid "around corners", like a carpet on a staircase, where the bottom "stair" flows seamlessly into the larger ground-floor plane - which itself is the wall encasing the next flight of stairs as the formation rotates.

What can we deduce from this elaborately executed set of lay patterns about four or five dimensional figures?

(Highly recommended for expanding understanding of this article's content!)

4. "The perfect circular geometry of the Harlequin Triangle", http://www.martinkeitel.net/cropcircles/harlequin/harle.page1.html.

5. "The next dimension of the Harlequin Triangle", http://www.martinkeitel.net/cropcircles/harlequin/3dmath.html.

1. "The 'Matrix' is a Reality!", https://divinecosmos.com/start-here/articles/49-breakthrough-scientific-article-the-qmatrixq-is-a-reality

6. A little book of Coincidence, by John Martineau, Wooden Books, 2001.