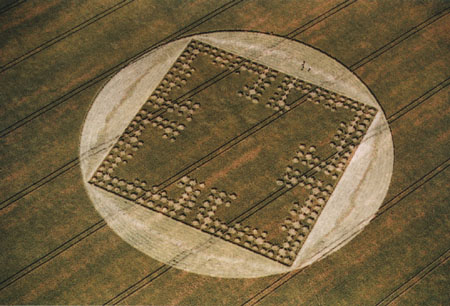 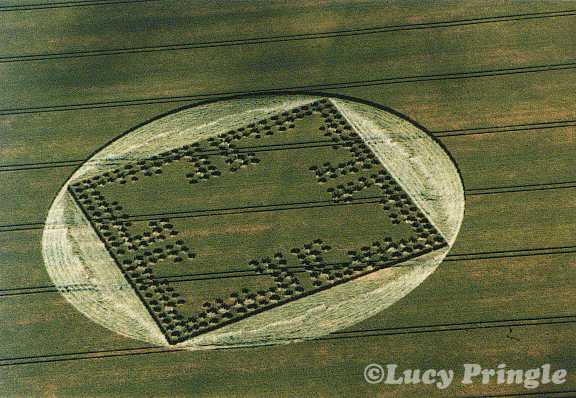 First, in July, the two-dimensional graphic pattern, made of standing crop on a flattened background. 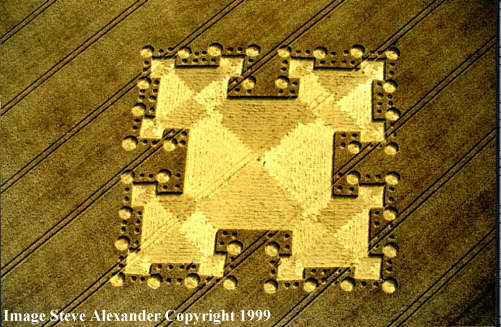 Then, this formation in August, now made with downed crop on a standing background - by cleverly downing the crop in two directions which will give this split-shaded result from any aerial viewing direction. So with shading, crop-circles intimate three dimensions. The shadows here highlight this three-dimensional pattern: the top half of an octahedraon, with its two smaller fractal iterations, and circles outside which could imply "and so on".

Notice that the diagonals are made of not simply straight lines, but of a series of alternating "steps".

Here's the contours of the crop-circle's pattern.

This is one way to illustrate the pyramids' relative size and height. In the crop-circle pattern itself, of course, the pyramids' are overlapping.

Here's the placement of fractal, rising complexes of pyramids, made explicit by simplifying and generalizing the crop-circle's shading, since in the crop-circle, the pyramids are part of each other or one connected form, whereas here they're drawn separated.

This would be a horizontal slice through the previous drawing, from side to side, ignoring the front-and-back dimension. We have here a shape close to the earlier introduced Sierpinski sieve. 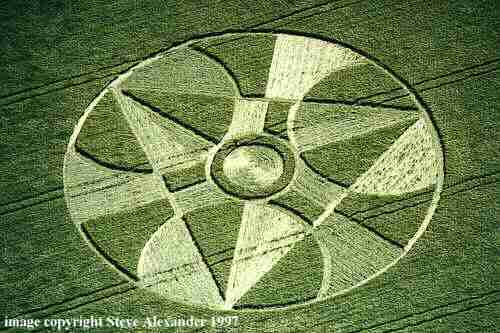 By specifying the grain's directions of lay, Martin underlines other levels of implicit triangular and other shapes. 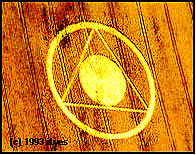 Here's an example of G. Hawkins' crop-circle geometry theorem number two. In this pattern, which is often implicit in crop circle symbols, the area of the circumscribed and inscribed circles is a neat 4:1. 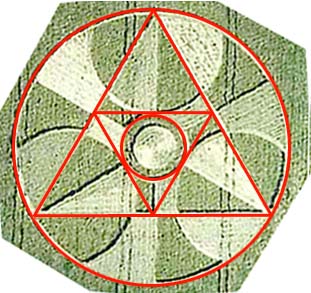 Here, G. Hawkins points out that by theorem two, the circumscribed (large outer) circle is 4 times the size of the here undrawn inscribed circle which just touches the larger triangle's sides. And that this proportion repeats for a triangle surrounding the larger of the inmost circles. This makes the area of the largest circle to that of the larger in-most circle 8:1, which in turn corresponds to the musical note C'''.

Paul's figures were not made with the Winterbourne Basset crop-circle in mind. However, completing and inflating that crop-circle's spheres (disregarding here their relative sizes), while thickening their connecting lines, and stretching the whole figure in space, we get above: that crop-circle's 3-D variation number one. 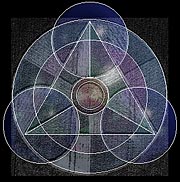 Here, Martin Keitel again completes the middle-sized circles and adds a logical circle joining their centers. The right-hand version accounts for the crop-circle's actual paths, and the left-hand one averages these into lines. 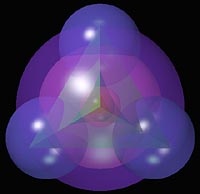 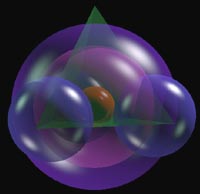 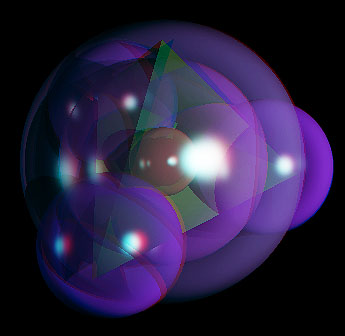 "Blowing up" everything and stretching it out, we get above: 3-D variation number two. 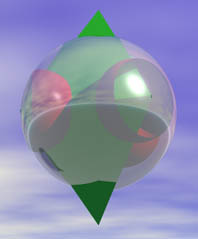 Adding the middle sphere, plus adding a logical matching tetrahedron pointing the other way onto the back of the first one, and stretching out the whole figure gives: 3-D variation number three.