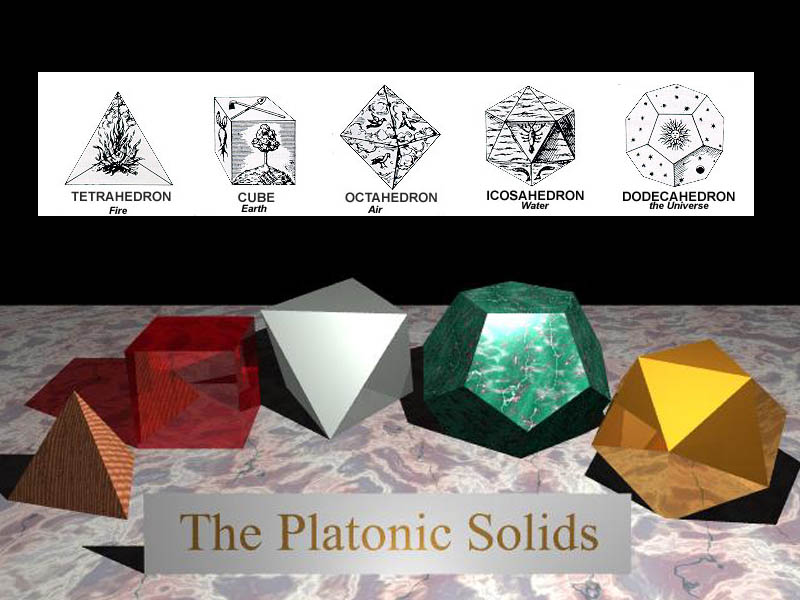 All the Platonic solids can fit exactly into spheres, and many of them can fit precisely into somewhat larger versions of each other. 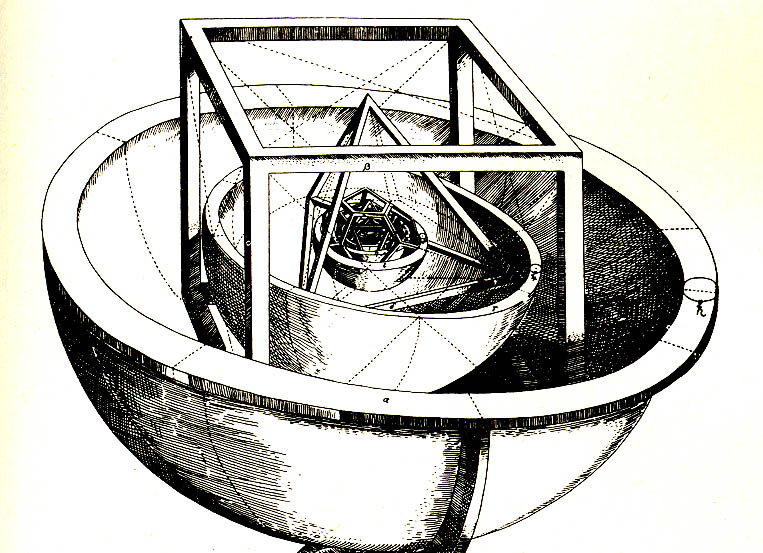 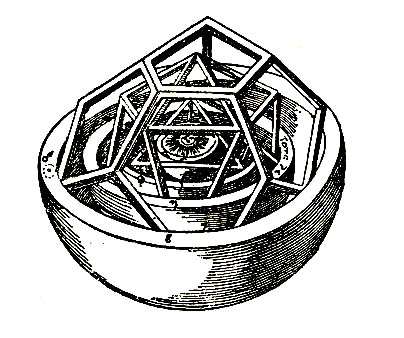 illustrations from John Martineau's "A little book of Coincidences"

Kepler hypothesized that the orbital distances of the 6 closest planets to the Sun could contain shapes of the 5 Platonic solids between them. The planets' orbital elliptical variations would be contained within the thickness of the spherical shells separating them. 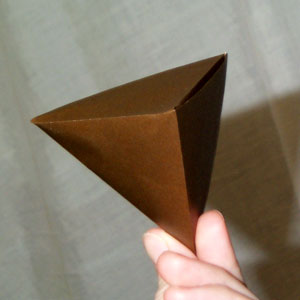 A tetrahedron is a symmetrical solid with 4 equilateral triangles on its surface. Like a pyramid with 3 sides and a base. It's the simplest 3-D symmetrical shape with straight lines - just as a triangle is the simplest 2-D likewise shape.

The diagrams above show three views of a tetrahedron. The first one, with the dotted line, is from a slanted sideways perspective. The second one depends on how you focus the central point - it can be both looking down the tetrahedron from above, or seeing its bottom surface and two sides, or seeing transparently through its front surface. The third view is seeing either the back surface or edge through two transparent sides - yet notice that it could also be an octahedron as seen from above!

The tetrahedron is the only regular polygon (3-D shape with equal sides and angles on all its surfaces) which directly repeats itself on smaller planes. Connecting the midpoints of its sides reveals a touching smaller tetrahedron in its inner space, etc. etc.

An equilateral triangle inside a circle: or a tetrahedron inside a sphere, as it's viewed from above.

The same tetrahedron inside the same sphere, but viewed from its side, gives us this triangle inside the circle. It's upper corners are at the earlier mentioned 19.5 degrees above the sphere's "equator".

The ratios in both these illustrations are often found in crop-circle patterns containing triangles.

back view
illustrations by Bert Janssen

Two tetrahedra can overlap and combine into a "star tetrahedron", which in its 2-dimensional form is the "Star of David" or "Seal of Solomon" (David's father), known for its subtle, esoteric levels of meanings.

Among other ways, one could see it as a connected system either at rest or moving in one direction. Or as the green tetrahedon spinning clockwise for example and the red counter-clockwise. Or as perpendiculars, with the green one revolving horizontally, while the red one revolves vertically.

As I understand Jens Rowald's references to Richard Hoagland and Stan Tenet's tetrahedral physics, the energy path from the center of a rotating sphere to its surface will take a spiral path creating a tetrahedron touching the sphere's surface. Perpendicular tetrahedra which rotate will make spiral energy, creating the electromagnetic lines along which dots of energy gather into matter. Rotating tetrahedra of different size scales will interlock.

It's said that energy from larger, rotating, more powerful planes, spirals inwards down to/through our atmosphere (forming a shape like an upside-down spinning pyramid), until it focuses at a point, and then spirals on outwards (like a counter-spinning erect-pyramid) to/through the ground. That the Eyptian pyramids, for instance, are thereby energy-focusers between the Earth and outer Space.

Likewise in the growth structure of a tree's leaf distribution or of its branches compared to its root-system, connecting the atmosphere with the underground. Fresh energy spirals into a pulsating, digesting, living organism, and saturated energy spirals out of it. Water also moves from larger to smaller in spirals, as down a bathtub or sink-plug hole. 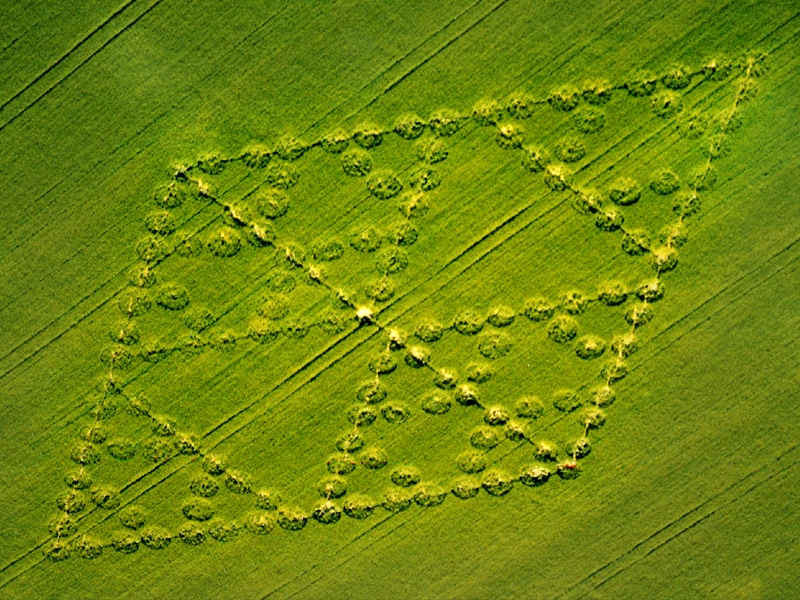 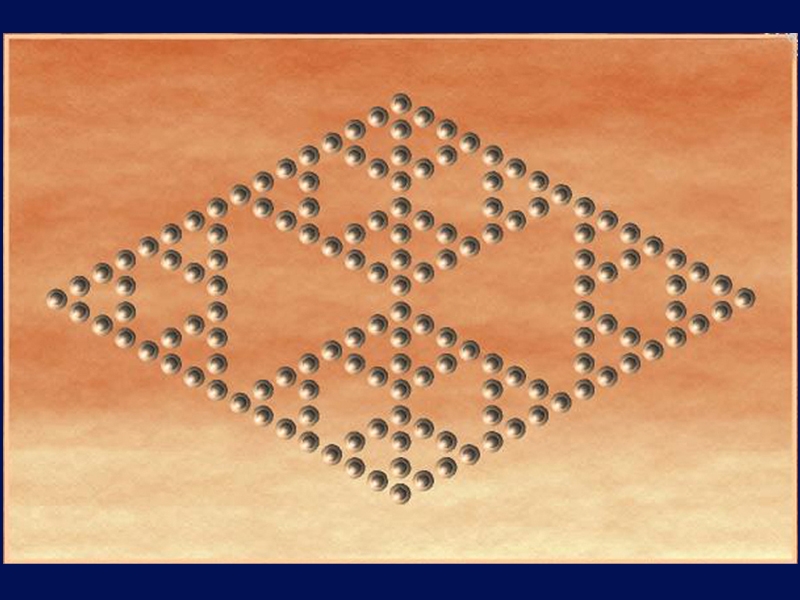 This shape or arrangment of componants was afterwards used in the technology of cell-phones. The crop-circle was both in the field beside, and also geometrically fits neatly into, the later famous Chilbolton "Face" and "E.T. code" crop-circles (the "code" formation describes an extraterrestrial being in detail). 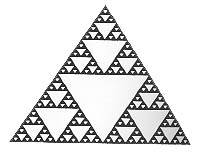 Extending the fractal, we get this triangle made of smaller triangles, or seen from above, a pyramid made of progressive levels of smaller pyramids. 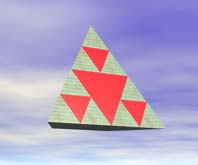 As we'll soon see, the red triangles inside the green can also represent a side-view of 3-D smaller octahedra embedded in a tetrahedron. 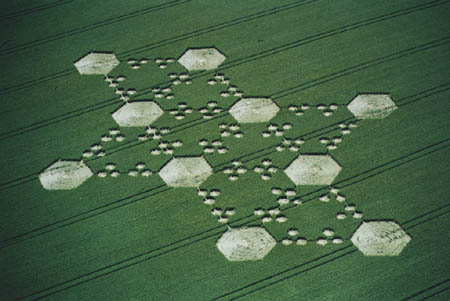 The smaller crop-circle shapes here were likewise hexagons, not circles. 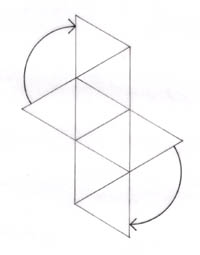 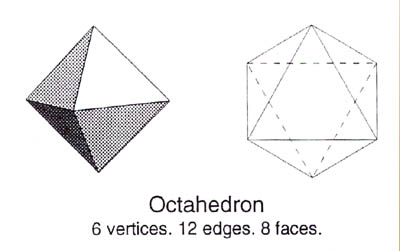 The difficulty with showing revolving solids in the fields' crop-circle symbols is that of representing 4 (or more) dimensions in 2 dimensions.

Taking the pathways alone from this crop-circle (putting aside its small hexagons for now and treating the large ones as mere points on lines), when we fold the lines together, we get a 3-D octahedron.

Notice that the 2-D view of an octahedron on the left gives a square, and on the right a hexagon, besides the triangle shape focused on until now. 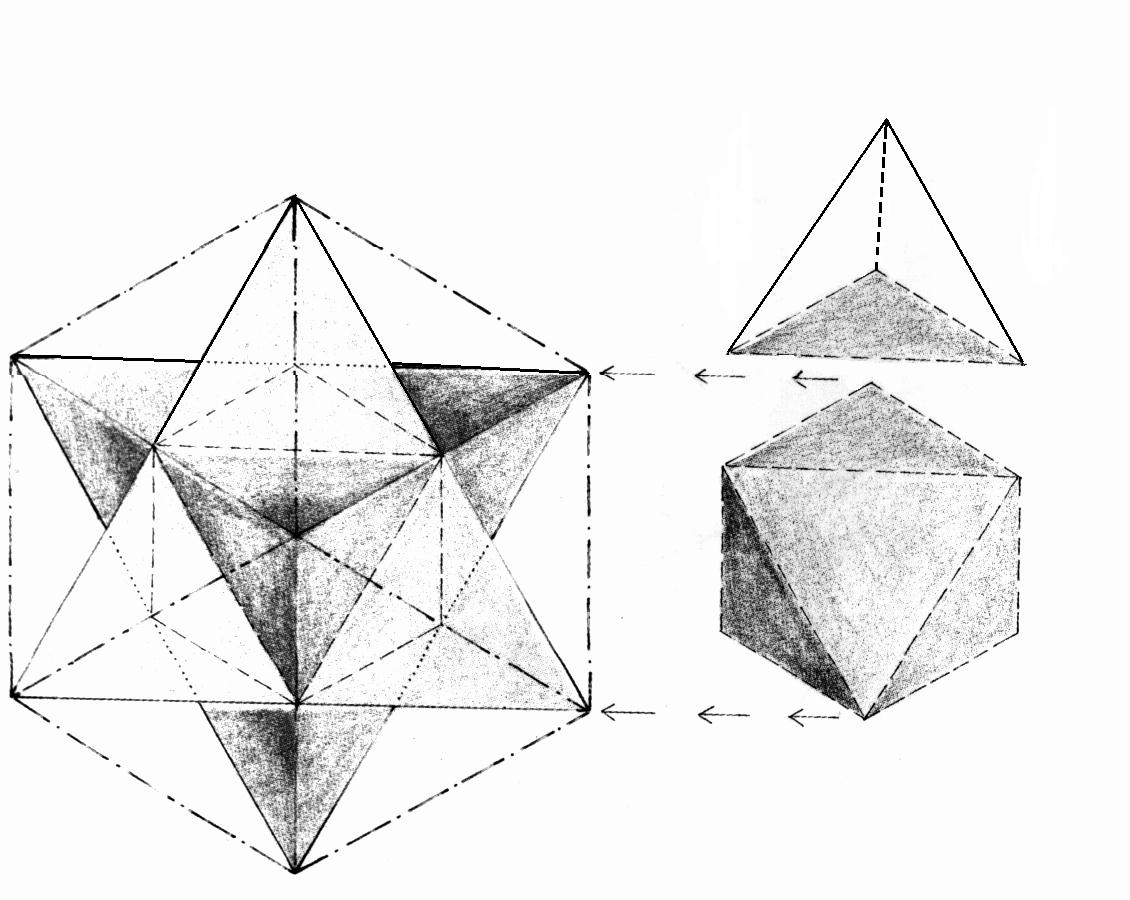 By adding a smaller tetrahedron to each side of an octahedron, we get a star-tetrahedron. 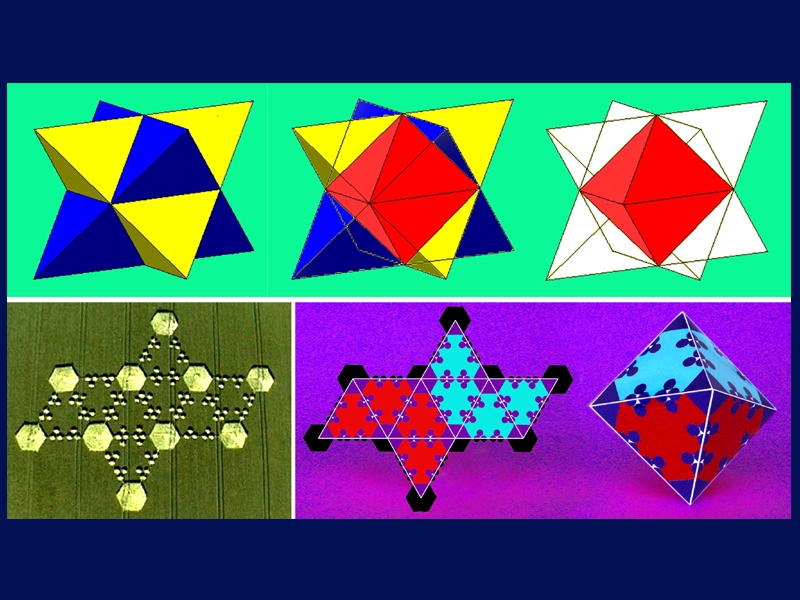 Now see how the crop-circle at bottom left, when folded into the octahedron, impressively incorporates the formation's large and small hexagons as reinforcing patterns along its edges and vertices.

Above that, as beautifully drawn here, see how an octahedron fits into the intersection-area of a star tetrahedron. Maybe on some scale the Universe's huge, newly discovered octahedra will turn out to be inside either such star tetrahedra or other symmetric Platonic solid shapes?