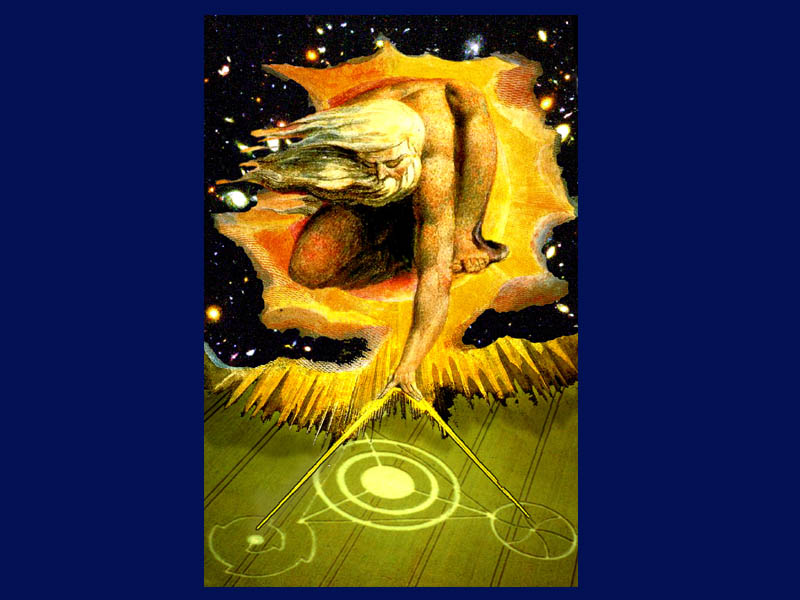 In 1997 and 1999, at least 9 crop-circles had forms which closely relate to the new-found shape of the Universe. Whether this is to focus our attention on that little publicised discovery, or is because these geometrical forms (octahedra and tetrahedra) are perhaps found in many environments and on lots of levels in Nature, or for some other reason, I don't know.

2. Superclusters of galaxies
in Battaner octahedra 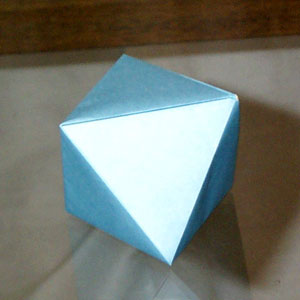 Because the orbiting Hubble telescope and other new telescopes outside the Earth's atmosphere have been able to take far more detailed and clearer photos than all earlier Earth-based telescopes, it's been possible since year 2000 to make a new map of the skies - of the galaxies, clusters of galaxies, and their super-clusters of galaxies. Measurements of radio-waves, x-rays, etc. have located many non-visible galaxies.

This data has been combined, and it turns out that the known super-clusters are gathered along lines and at intersecting points which form at least 4 locally identified octahedra, which are joined at their tips in a sort of chrystalline pattern. Between and inside these octahedra are relative voids of magnetic fields and galaxies, though there may well be lots of dark matter. This is the largest directly observed structure in the Universe.

This suggests that energy, affected and organized by magnetic fields much earlier in our Universe's history, and as also predicted by the super-string theory, became distributed along filaments and combined into luminous groups of astronomical objects, much like water-drops on a spider's web. Dark matter collapsed and under the pressure became luminous.

Beyond all this, the unclear maps of the Universe's even larger cosmic microwave background (CMB) seem to show a spherical shape with the super-clusters of galaxies lying within it in a disk form on a fairly flat plane, much like a giant galaxy-shape (or pancake).

The next illustrations in this section are from
the referenced articles about the Universe's shape. 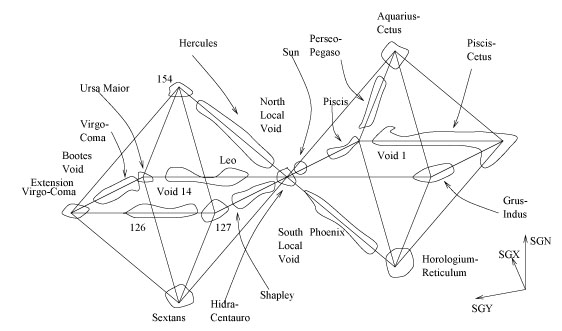 Here are the two closest octahedra, seen from our sun's position near their meeting point. The super-clusters, which may each contain billions of galaxies, are found along the edges and at the corners of the shapes, and relative voids are indeed found within the shapes. Because the one end of the long Piscis-Cetus area points away, it may be pulled by an even larger scale's shape.

Judging from its insignificant position in our own galaxy, the Milky Way, our sun could hardly be a major center in the Universe. So from the map, I wonder if one would see octahedra on both sides from almost any occupied position in space?

Here's a flat map of the four octahedra (plus part of two more) which we can actually observe in the skies, because they're within the area of space closest to us.

And here's the same area in its 3-D octahedra. "A" and "B" are those shapes closest to us, while "C" and "D" are farther away and thus less exactly estimated and observed. 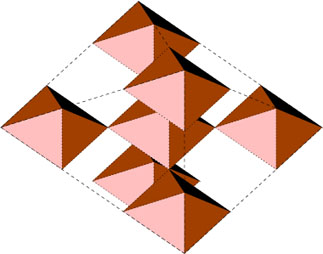 According to the presently dominant theory, the observed astronomical octahedron shapes can have only one direct, smaller fractal scale or iteration before historical forces of radiation will have negated the necessary magnetism, ripping the even smaller edges/filaments in space apart. There may however be any number of larger iterations in space, i.e. octahedra within larger octahedra etc. 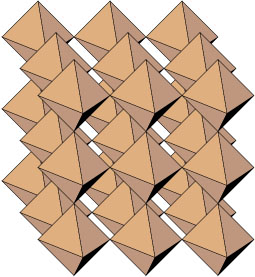 According to the "egg-carton" theory, there may also be any number of adjacent octahedra, joining at all their points.

Our local sun also has an octahedron-shaped magnetic pole system: north pole, south pole, and 4 poles along its equator. At these points the sun emits streams of charged energy-particles. 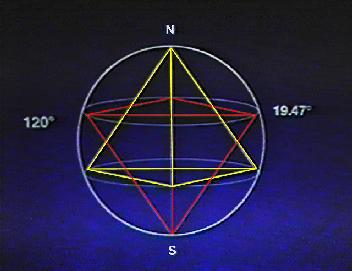 On the other hand, when placing a star-tetrahedron within a spherical planet, their intersection points or geometric "stress-points" at 19.47 degrees latitude will often show where great energies release and interact between that planet's underground and atmosphere. Evidently, the planet's continuing vibrations create lower pressure here, and higher pressures rush out. Examples being the Great Red Spot's continuous storm on Jupiter, the Great Dark Spot of Neptune, the Hawaian volcanic eruptive area on Earth, and the Sun's largest "sunspots" or ejected solar emissions of great energy. 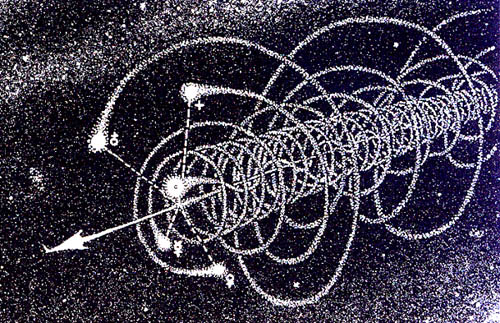 The sun itself (closest to the directional arrow) spirals around its arm of the Milky Way. The 4 spiral orbits around the sun in turn are those of its four closest planets: Mercury, Venus, Earth, and Mars. 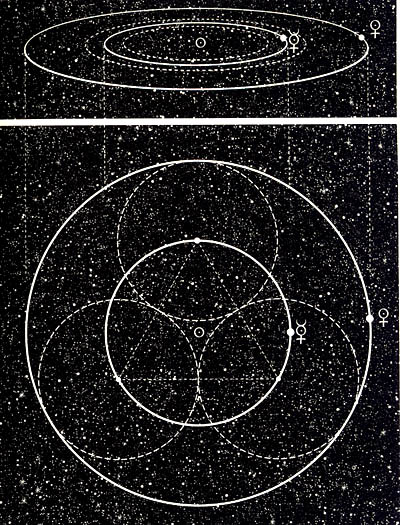 illustrations from John Martineau's "A little book of Coincidence"

These are the proportions of Mercury's average orbital distance from the Sun, to Venus'. In the lower drawing, Mercury's orbit will touch the the three adjacent circles' centers, and Venus' will tangent those circles.
Continues in Part Two - click