The British formation from 2005 which impresses me most geometrically is the one at Woolstone Hill from Aug. 13. It was in the less-visited Uffington region, not in Wiltshire itself. 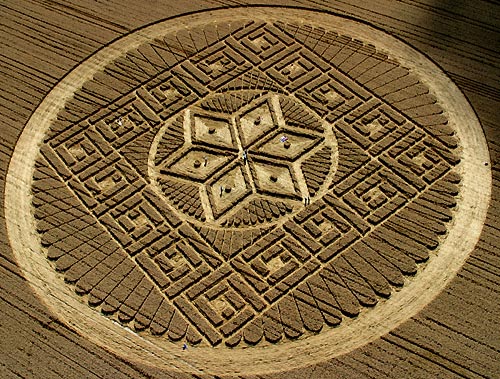 Notice that there's at least two serious geometrical "mistakes" in it. Firstly, in Jaime's photo above, a whole set of rectangles is wrongly (inconsistently) oriented: the set to the left of the very bottom set should have been in the making rotated 90 degrees counter-clockwise, so as not to duplicate its next neighbor on its left.

By traditional consensus, a formation judged genuine, and thus technologically blue-printed in advance of its making, would never contain this rather major design inconsistency. 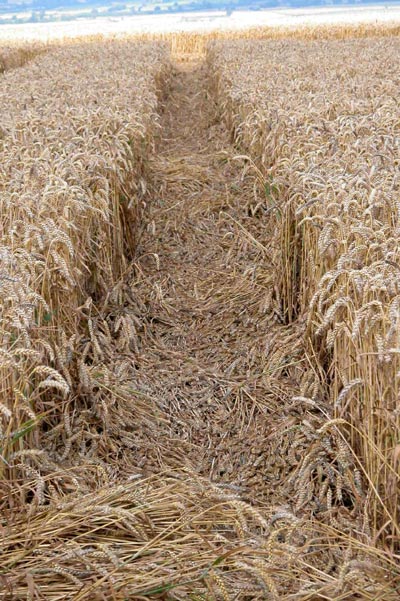 Secondly, Mike's photo, taken two days after the formation's creation, shows that at least some of the straight lines seen closer up are far from straight on their sides. A careful examination of photos from the air corroborates this. The formation was too new and the paths too wide, for this crookedness to be caused by clumsy visiting investigators or weather damage. 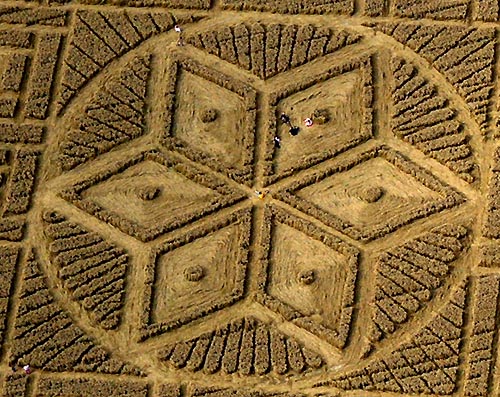 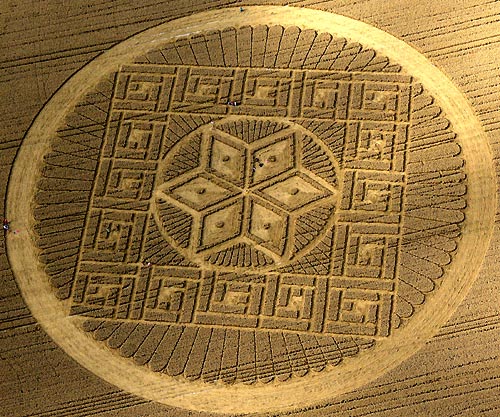 So we have two important choices: 1) Either genuine formations, made by something other than people in a field, can contain a large geometrical abberation ("mistake"), which breaks an otherwise perfect pattern, and can also have irregularly wavering straight lines. 2) Or hoaxers are now capable of making a formation covering five tramlines with many different sorts of difficult shapes, with this many pieces, which are interrelated to create such a complex pattern as this one, while making an aesthetic lay-pattern in at least some of the larger parts. 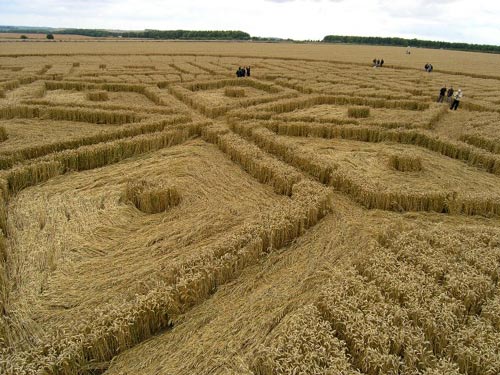 Either way, that's a tall order to digest.

If genuine formations can have such abberations, we must stop using precise geometrical consistency as a criteria for judging if a formation is genuine or not! And stop using at first unnoticably crooked lines as evidence. This removes two of our chief criteria of judgement! But if the true answer in this example would be hoaxing, I think in turn that we can stop being so impressed by our first assumptions of geometrical complexity, as seen from the air!

Yet this visually pleasing complexity is perhaps the primary, eye-opening and often shocking impression for most people around the world, of all levels of knowledge, who find crop-circles attractive and interesting.

If this formation is man-made, hoaxers can now: a) Stretch at least 36 evenly separated and (almost) straight lines across the long distance of this diameter, breaking them into widely separated sections, which nevertheless continue through lines across the whole figure. b) Round off the resulting long sections almost perfectly, so they're aesthetically pleasant. c) Create descending series of rectangles in large numbers and with complex interactions. d) Make a 6-pointed star, with the anglular measurements that requires. e) Make the nicely rounded type of lay found within the central diamonds.

In that case, the hoaxers' practical learning ability is multiplying phenomenally each season, helping to explain why birds'-eye formation-patterns become continually more and more complex.

In seeking genuineness, it's one thing to say we shouldn't overweigh our initial and primary response to seeing most overhead crop-circle photos - and it's another thing to actually suspend relying on that overwhelming impression. The visual sense lies much deeper in our psyche than intellectual skill. Meaning, no matter how right these conclusions about crop-circle geometry in practice might be, they will rarely influence readers much, because "seeing is believing".