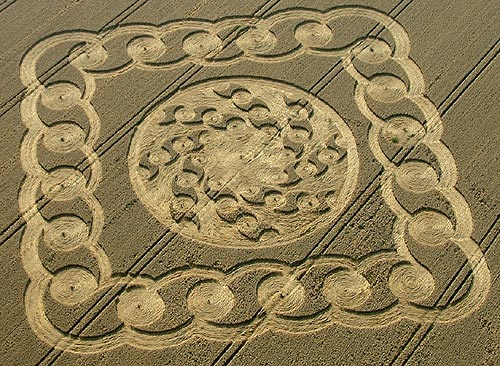 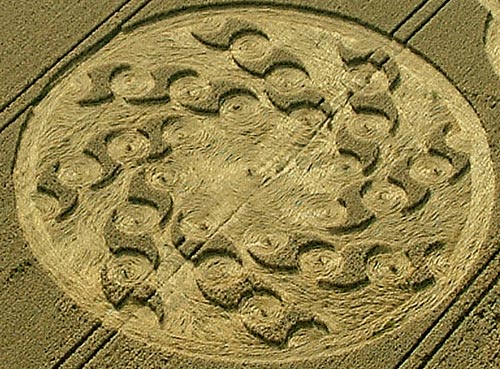 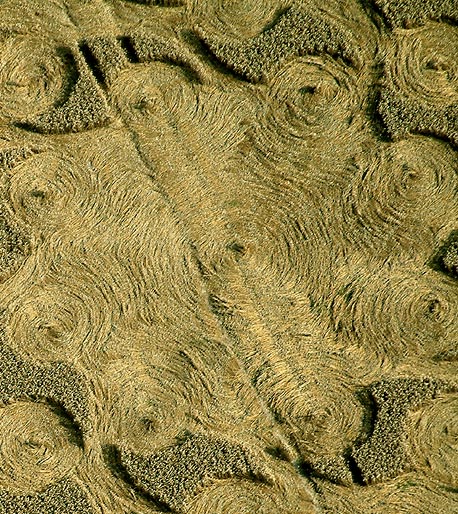 Which evidence is there that this formation is genuine or is hoaxed?

The hoaxing hypothesis is based on this crop circle's similarity to the proven hoaxed (see reference 1) East Field formation shown below, made a week earlier. 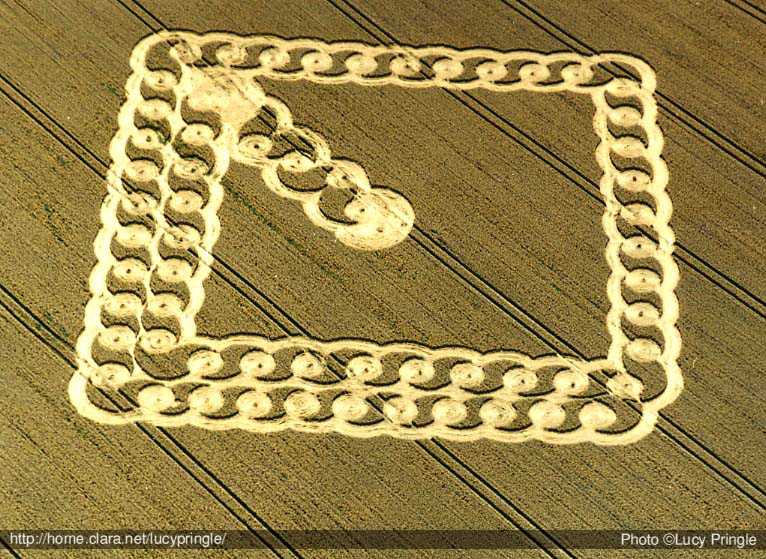 Both crop circles have the same sort of building blocks, the same orientation to the tramlines, fill the same bredth in tramlines, use the same basic principles of geometric construction, and were just "across the street" from each other.

All following photos are from the South-Field crop circle, here 5 days old. 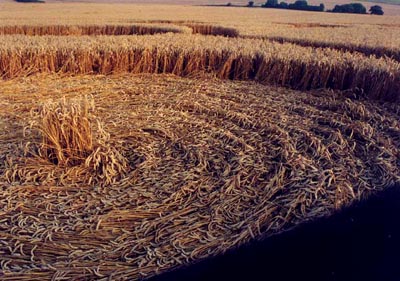 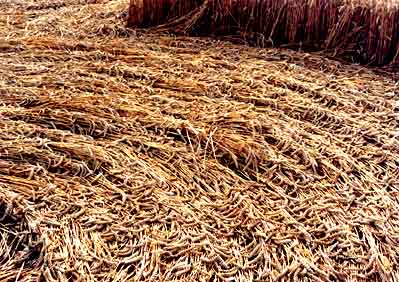 These typical rows appear to be too close to each other to be made by stomper-boards. Notice the graceful, moving way their edges are raised, which in the expansive formation gave a very airy feeling - and which I think helped inspire the numerous types of spiritual practices being done by its visitors, while I was there: including a sort of fast Tai-Chi by a Chinese group, prayer, meditation, and related practices by independent individuals - more of this happened here than I've ever seen in any of the other 71 formations I've visited.

The lay: Between the various types of sections in the central piece, the lay's transition was very smooth. See John's photo 2: There were no abrupt transitions between the standing S-shaped sections' included circles and the irregular downed crop areas between those sections. Now see John's photo 3: Again, there's an impressive smoothness between the rows concentric to the uttermost central circle and the S-shaped laid rows which continue up to the 8 inner circles. Personally, I fould this last transition to be the most charming in the formation, and meditated twice on one of the "rounded corners" of those connections. 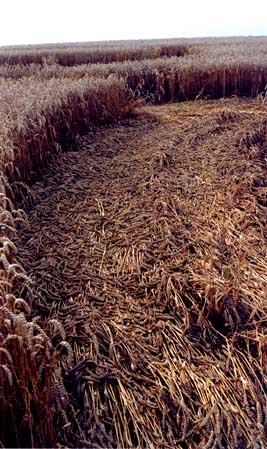 Here the rows' distance from the standing edge could be a stomper-board's, but I don't know how one would make the high middle ridges. Either you lay the crop fully down or you don't. 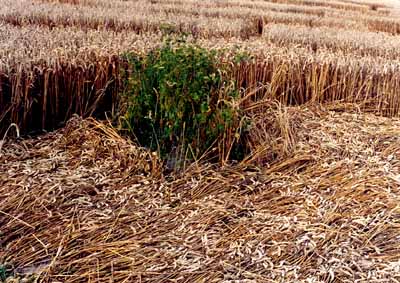 The bush is big and would also be noticeable at night. On its left side the stalks are downed, but on its right side they're still standing just beside the plant. Two possible interpretations: 1) hoaxers' imprecision; 2) the genuine energy's whirling approach from the left, moving upwards at the bush and somewhat around it, leaving a "wind-protected" edge on the right side (the way rain from an angle leaves a dry strip beside a building). In the latter case, the claim that the genuine energy focuses on and downs one type of plant only, would have to be modified, as all these grain-stalks should then lie flat.

Construction of the Outer section

The logical place to start a possible manual construction would be from the figure's upper right corner in John's photo 1 - because here the tramlines and point C converge best.

Construction of the Inner section: 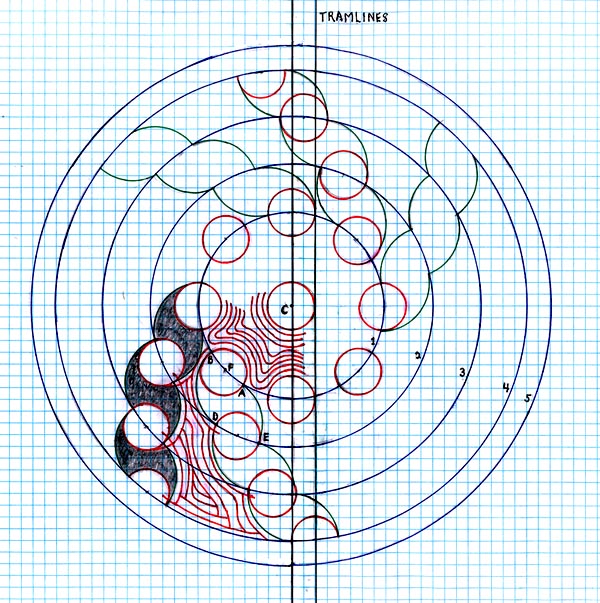 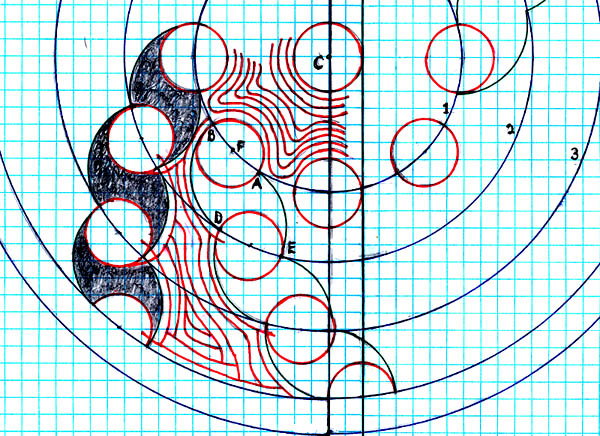 Possible manual construction again starts from the upper right corner in John's closer-up photo 2 - because the tramline in the inner section's upper right is widened under the lay.

All the inner section's circles are half the diameter of the outer sections' circles.

Many standing tufts appear to be made just off their circle's actual geometrical center.

The entire central piece in South Field seems to lie at 4 widely different distances from the crop circle's squarish sides of the outer section.

Here I summarize the points I see for and against the genuineness of the South Field formation.
For:
Against:
My conclusions regarding origin:

From the fluidity and 3-D feeling of particularly the raised edges, and the narrow rows, gentle lay and overall peacefulness, I personally feel the crop circle to be genuine. But objectively, the arguments for hoaxing are heavy and compelling. So I must pit an intuitive, emotional, and wanted conclusion against a dryly logical, unwanted conclusion - getting an ambiguous outcome.

My own preferred criteria for assuming genuineness: of being overwhelmingly impressed, aesthetically pleased, and emotionally affected - along with an appreciation of a symbol's sophistication and a marvel over certain, unexplained lay details and the smoothness of lay transitions - these criteria have to be reassessed regularly. Each year when I investigate new cc's, I find additional small, specific phenomena in proven hoaxed circles which I've until then assumed were evidence for genuineness. But regarding various other new cc's, I also find new techniques and angles which rule out their being manmade on the spot.

If hoaxers indeed made the South Field crop circle, I can't object, as it fulfils what I emotionally look for in crop circles. It's beautiful, fascinating, stunning, inspiring, peace-bringing, and has affected numerous other visitors and viewers likewise. It was a rare pleasure to be in on the ground.

If this formation is physicaly manmade, it has even so deeply puzzled for 8 months at least one researcher who has been doing crop-circle geometry for years (Allan Brown) and one researcher who has been studying lay details for years (myself). I have in fact earlier met one well-known British hoaxer, who has shown me he has the geometrical sophistication to draw and, I think, at least plan the execution of such a design.

It seems that the overall geometrical beauty of a crop circle, although moving, is not a factor proving genuineness, if it can be shown that this could be created by manual methods in the field in the alloted time-window. We have to find (and document) design and lay details which are totally unreasonable to create or which simply can't be done on that scale (that many times throughout the formation) in a night. And it's useful to ask experienced hoaxers how they would make such a detail - and figure if that figures.

If the formation is manmade, it's time to tempt the best hoaxers to somehow becoming partners in our explorations, since the subjective, positive effects of their best results would prove to be so powerful. This would corroborate what I've personally seen inside several previous proven hoaxes: some sensitive people are sincerely moved, have deep emotional and spiritual experiences, by the thought of the crop circle's being genuine and by the symbol's and lay's beauty and symbolic appeal. So these experiences by themselves are not true measurements of a crop circle's genuineness.

And if the South Field formation is indeed genuine - we still have some serious explaining to do. For if it's genuine, we can't escape the conclusion that the intelligently directed, real set of energies is closely commenting the hoax-style from East Field. We purist researchers have a dilemma here. This new formation is an improvement or correction, but also an acknowledgement of some sort of close interconnection in a positive way with that hoaxing activity. If South Field is a genuine response to East Field, this elevates the role of at least the East Field hoaxers to also be inspirations for and early mediators of the later product of higher consciousness. This is how they often vainly describe themselves, but in this case it would be demonstrably true - despite numerous other cases of hoaxing exaggerations, lies, and deceptions.

My very strong feeling about this crop circle is that if it is ever proven hoaxed, I'm not bothered putting down sophisticated hoaxes anymore or focusing that much on if such formations are falsified or real - because it was a really charming, exquisite, and moving formation, obviously also for other visitors.

"The History of Crop Circles. And then there were three?", Freddy Silva, http://www.cropcirclesecrets.org/crop_circles_history03a.html.

Feel most welcome to write. My e-mail address: jonah102@gmail.com