Overlooking the obvious
and seeing what we want to

You can find the background story about this spectacular photo taken near one of Italy's first crop-circles, as summarized by Adriano Forgione, the editor of the Italian magazine, "Hera", and as reported in Linda Moulten Howe's article, "Mysterious Lights and Fourteen Crop Formations in Italy" on her website, www.earthfiles.com. The article's relevant section is repeated here:

L.M.Howe: "On ... June 7, at 5:30 p.m. in the late afternoon, three teenage boys were walking along a field two or three kilometers outside Montegranaro, near Ascoli, in the center of Italy about 20 kilometers from the Adriatic Sea and 250 kilometers north of Rome. The young men were astonished to see a sphere of light appear and send a thin beam down into the crop. One of the teenagers had a new cell phone that can snap digital photographs and he took two frames. Adriano Forgione, Editor of Hera magazine, heard about the young man's images from the mayor of Montegranaro, a longtime friend. Forgione contacted the young man and obtained one of the two images shown below." 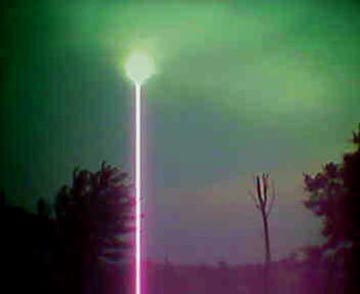 A. Forgione: "June 7, 2003, at 5:30 p.m., a 17-year-old young man who has asked to remain anonymous, took this digital image on his new cell phone that has a built-in digital camera near Montegranaro, Italy. The next morning three circles in a line of varying sizes were discovered, similar to the earlier Settimo formation.

They saw this ball of light glowing in the ground and created this light Ł this they told me Ł this light beam to the ground, but no crop was formed then, nothing set on the ground, only this light beam. He did 2 pictures. He gave me only one, but I saw this picture on his phone. It's impossible to make a fake on the phone, I can tell you. For me, it is an original witness. ...

Location: Montegranaro, near Ascoli, in the center of Italy about 20 kilometers from the Adriatic Sea and 250 kilometers north of Rome. Pattern: Three circles in a line of varying sizes like Settimo's April 25, 2003 formation.

Montegranaro's first of five formations in the region since this one was discovered on June 8, 2003, not far from the site the young man saw and photographed the sphere of light emitting a beam downward ...on June 7 ..." Of the 14 (first ever) Italian crop-circles, appearing within a two-month period of 2003, at a minimum those reported in their articles with pictures of stretched and exploded nodes must undoubtedly be genuine.

And if the contents of the Montegranaro photo from June 7 are as is claimed, it's of course a momumental, world-wide first-ever (to my knowledge) close-up photo of the immediate background source behind a light-column in relation to a crop-circle!

Therefore, it would be very important to get a good photo-lab analysis done in detail on the original cell-phone photos, or if they're now lost, on their original printed copies.

I therefore wrote to Italy several times, asking that the lab-analysis be arranged; I also asked to see the second photo, and asked the involved people to get the boys' story again in more detail.

I asked these questions, but got no answers:

"About how high in the sky was the light-ball when you all first saw it?"
"About how far away was it?"
"From start to finish, what happened in detail?"

So let's look at the web photo in detail ourselves. I've never seen a photo taken on a cell-phone, so I don't know if limits in its technology can explain away the following things.

In order to more closely study all this, for comparision, I got a photo printed of the Internet photo, and also tried using Photo-Shop to change the web-photo's contrasts, lightness/darkness etc. A couple things became clearer, which were not so obvious in the original computer-screen photo.

In the original web-photo, for 5:30 P.M., the whole scene is extremely dark and vague. Isn't this unnatural for June, even at this particular site (none of the later reporters evidently actually visited it)? The light-phenomena is in front of the left bush or small tree, and therefore very close to the camera. It can't be much above the bush/treetop, and the cactus-like plant or short, partial tree-trunk in their background sets the size-scale.

The lit-up greenness in the sky, which reaches almost to the right border of the picture, seems to stretch too far away from the close-by and strictly focusing lightball to be a reasonable side-effect of it. And if it is a side-effect, wouldn't it be on the left side too? Also the somewhat violet shade on the whole right side and dark green on the left, suggest that the colors have (unintentionally or otherwise) been manipulated in the digital photo on Internet. These are not natural atmospheric colors and the down-focusing light-ball would not affect such a wide area on one side only. Also, to the left of the light-phenomena especially, the entire sky is divided into a series of horizontal and vertical criss-crosses (pixel columns).

A tv-cameraman had this to say: "A mobile-phone camera is too crude, technically, to handle intense light. The photo's darkness and artificial colors are the camera's attempt to balance the light-input. Due to the upper light-circle's strength, the adjacent vertical column of light can be a "smear" on the photo from it, where the content in the light-sensitive cells in a touching strip of the photo is wiped out. If the light-circle is distant, the lit-up sky to the right could be reflections of the circle's light on local clouds there. This series of probable technical errors is because the crude camera will not see as our sensitive eyes would do so."

It's not a particularly good sign, I think, that the photographer wants to maintain anonymity with this world-first scoop. Something else - about the three circles in the Montegranaro formation June 8. They're not elegantly shaped or geometrically sharp, and their size and distances are not beautifully related and placed. To be frank, they resemble beginners' man-made formations much more than those crop-circles considered genuine. Also, they weren't found where the light-beam was described, as is usual, but "nearby ... not far from the site".

We all have a tendancy to fill in missing parts of a pattern or picture with what we'd like to be there. So what is the genuine cell-phone photo a picture of? In web-photo form, something unrecognizable. A real BoL in distorted form? Perhaps some sort of small flare, commercial laser-light, or independent source very close by? Even a drawing or painting, perhaps in collage with an outdoor photo of plants? Or what? This is not real evidence.

N.B.: If any readers know of other good photos of a source (!) behind light-columns or light-balls, I'd be very interested to see them.