Click on these photos from 2002, to get their enlargements.
Except where noted, the photos are my own.

In the field just beneath the Cherfill white horse, a team of hoaxers were caught making complex formations the night of August 2, 2002, and had to flee, leaving two partially completed crop circles and at least one stomping-board behind. I visited the crop circles early the next morning and got a lot of pictures of their standing swirled centers and other details, and many other visitors came around during the day. 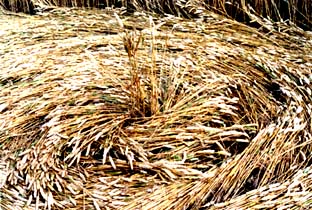 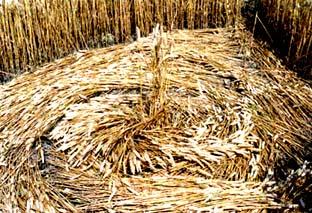 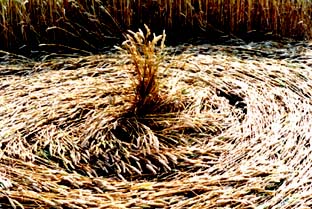 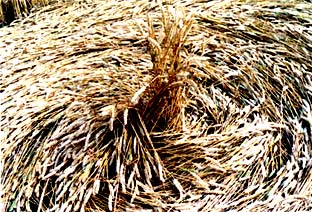 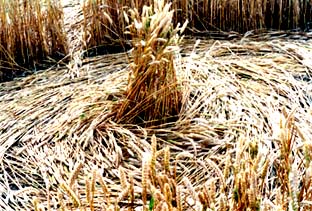 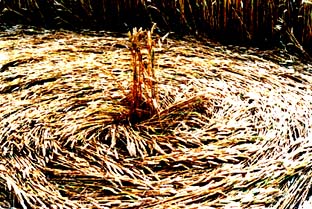 These 6 photos are local centers in parts of the closest formation, which was for me like a series of flower-petals resembling eyes. The photo underneath this text is of the center of the farthest-off formation, a ring and core circle. 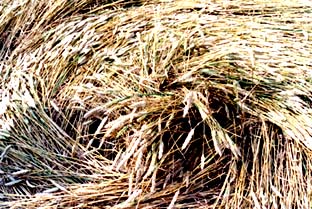 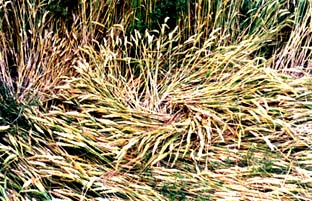 This rather simple, traditional, swirled center is from the Weetabix-advertisement formation above it. This detail was 2 to 3 weeks old, when photoed July 24.

I have previously believed that both these less elaborate kinds of swirled tufts above and most of the other details below were signs of a crop-circle's authenticity, but have now realized that these can be made by persons in the field with simple tools. 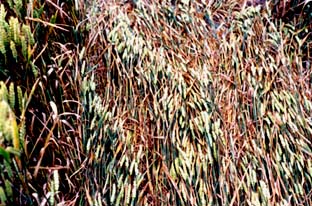 Here you see diagonally skewered rows of down-layed crop in a formation made by two Germans.

Each year they pay the same farmer to let them make a symbol in his fields, which they intend to be a communication sent back to the supposed extraterrestrial makers of genuine crop-circles. This formation was young - 5 days old, when the photo was taken on July 23. 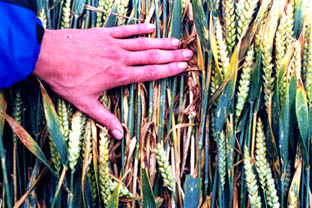 This photo is from a 10-day old alphabetized hoax on the next hill, "TITS". You can see clear, thin, parallel, vertical white lines on a number of neighboring stalks, most probably caused by the pressure of a stomping-board's edge. This sign of artificiality was first observed by the research community during the 2002 season. 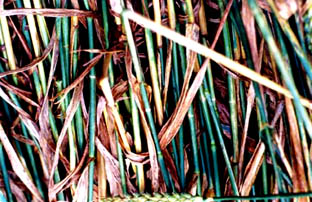 The stalks may also come down a litte unevenly, so the marks are not perfectly parallel in this second photo, which is from the Germans' formation. 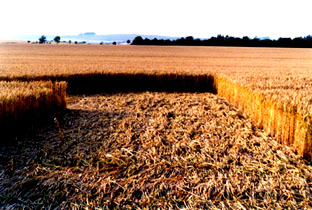 Here is a very crisply-cut angle and straight edges in the first number "1" of 1031, a number made in a field as an advertisement for a tax-reduction form with the number 1031. The formation was created in daylight, and the photo was taken 4 days later, on July 29. Someone later crudely expanded the "3" to an "8". 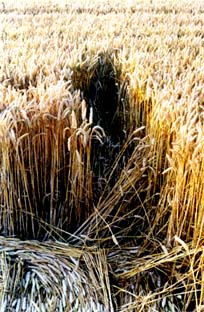 This photo shows down-layed stalks which curve around a corner in the second "1". 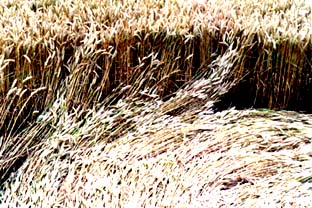 The last photo shows bunches of stalks which "exit" up from a circle, that is, they lay curved up its outer, vertical edges. It's taken from the ring at the Overton hoax mentioned earlier.

Early July 30, 2002, I had the opportunity to witness one of England's most famous/infamous hoaxers "make the best he could" of various types of complex crop-circle standing centers (other than traditional swirled tufts) with his hands and on-the-spot fantasy alone. In the night's darkness, he made a row of 6 different sorts of centers in a small strip of crop almost just inside a grain-field's border, and each set took him under a minute.

That afternoon, I returned and photographed his untouched results, and then untangled and raised the stalks the best I could into their original position. No one could then mistake any of this as part of a crop circle, and fortunately, due to the fairly quick correction, very nearly all the stalks were then harvestable.

My camera cound not take wider angles, but only details, so some of the sets were more photogenic than others. These are photos from the most inward parts of 5 of his results. Some centers were built out of folded layers of twisted or bent stalks, with each layer itself giving a differently-shaped form. In other cases, twisted or bent bunches near each other formed an overall center with a new pattern.

This last sojourn was of course illegal, but, I hope, fairly harmless, and it helps document for us what can and cannot be done by the best/worst of crop-circle hoaxers. 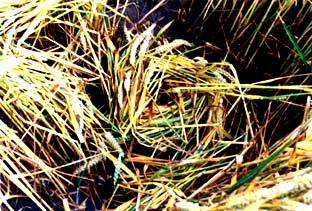 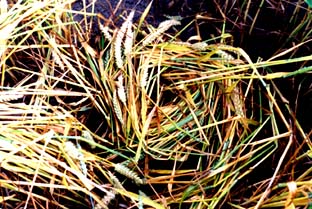 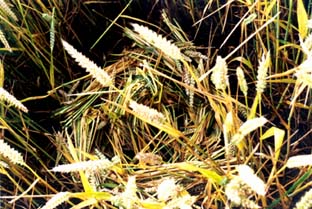 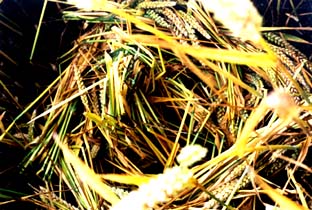 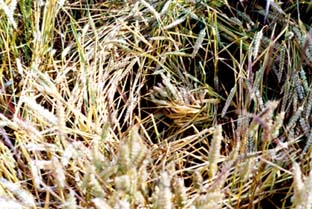 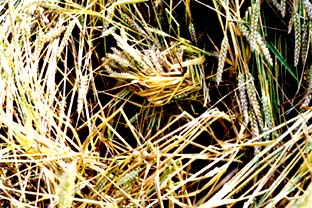 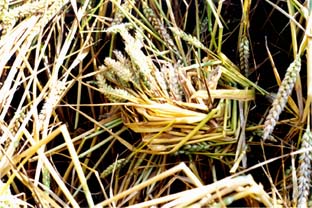 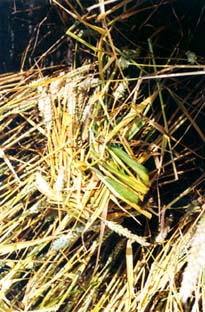 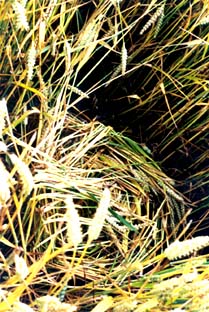 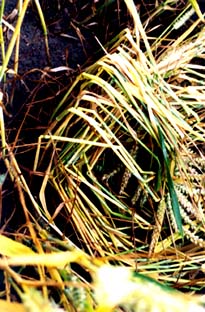 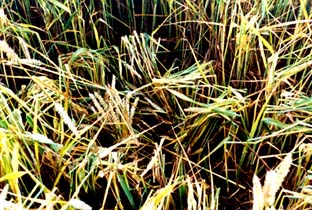