Ground-construction
as evidence for origin

Fascinating, beautiful, and gifted, theoretical geometrical constructions of crop-circles are often found along with their field reports and on specialized websites. In these step-by-step reconstructions from aerial photos, the many circles and regular polygons needed for making a crop-circle symbol are first drawn and then lastly, their unused sections are erased.

Often, the argument follows that all this preliminary, necessary "drawing" in the mature grain-field itself will show up as pathways, where downlaid crop can't have sections lifted again or "erased". Formations in which these parts of pathways are in fact missing are assumed to be thereby proven genuine.

In modern practice, however, these preliminary drawings can be made on a computer or even on paper, lines measured and parts of them erased, the preferred angles and distances kept simple, or computed and measured.

The question is then:
Can the finished drawing be practically reproduced in a field step by step, using pre-measured knotted strings or luminescently pre-marked tape measures, bamboo poles if necessary (filling in obvious holes afterwards), and by repetitively making equal arcs or lines from one point to the next needed one?

Whenever the order of steps in the field can practically proceed so that the finishing point of step one is the start for step two, which again repetitively continues around the formation, and when one or two pre-made markings or knots are the only measurements needed, one can vastly simplify the theoretical pre-made result in the actual crop-flattening process.

If the thus marked main distance and its halving or doubling are compatible with the standard width between the field's tramlines, the field's own lines could also often be used as background graph-lines during the laying out. Or if the final distances are in simple, whole numbers of British feet, we can ask who would most likely use this - hoaxers or the genuine energy?

A simple example of practical ground-construction 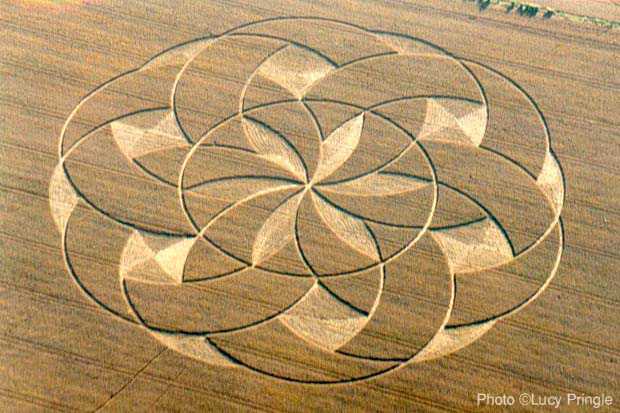 Compare this to the formal construction-method in, for example, the article: "Reconstruction of the Nursteed 11-08-2002 formation" at http://www.zefdamen.nl/CropCircles/Reconstructions/2002/Nursteed02/nursteed2002en.htm . Elsewhere Zef clearly states that his "reconstructions are not meant to find out how crop circles are created in the fields", but are "made to better understand the design of the pattern".

Although a formation may be large and beautiful, with lots of parts and subsections, and its overall symbol inspiring and moving, I think we need to find construction evidence from various types of closely observed irregularities, which will defy the common sense needed during practical hoaxing. We need to examine the finished product, the physical formation and its photos, for any irregularities.

There can be those that look like large or small "botched mistakes", for example when someplace is flattened while all its similar counterparts are standing, creating a visually irritating final product (I didn't visit the above sample formation, but see none of these in the photo).

Then there may be "nicety irregularites", which are geometrically unnecesary for the basic construction, are time-consuming, and which would often be only subliminally noticed in photos. (The one example I find above is the skewered, knotted meeting at the center of the diamond-like sections STEJ etc.)

There can be "too-detailed irregularities", as where mixed into the main lay, every second little group of straws points one way, but every third points another, adding extra harmony. Or regular junctions of neatly interweaving straws from several directions.

Or artistic, at-first "invisible irregularities", like layers of downed crop, each laid in other but consistent directions, underneath the visible, upper surface-lay.

Also there can be "mathematical irregularities", where difficult, non-whole proportions are used, such as in logarithmic curves, which really do require complicated measurements in the formation field, beyond the feasability of any fast construction-method.

Then again, there can be "two-dimensional impossibilities", such as large rings in standing, mature, brittle crop with no path leading to their center.

Those are weighty arguments for genuineness based on geometrical construction.